What’s Next For Illinois and Missouri?

We all love the song, “God Bless America”.  Yet, will God keep blessing us when our nation is passing laws every day that throw Biblical principles out of our culture?  There is a wave of cultural change in our country striking at the bedrock of our society.  The family is under attack.  Even if your state supports marriage (one man and one woman), your city might be passing laws to unravel the marriage laws your state passed.  The American way of life is inseparably intertwined with Judeo-Christian ethics.

When University City was trying to find a way to reward immorality in their city, I went to the City

Council Meeting to speak out about this ordinance.  Unfortunately, we were terribly outnumbered.  Yet, we must never give up the fight for the soul of our communities. 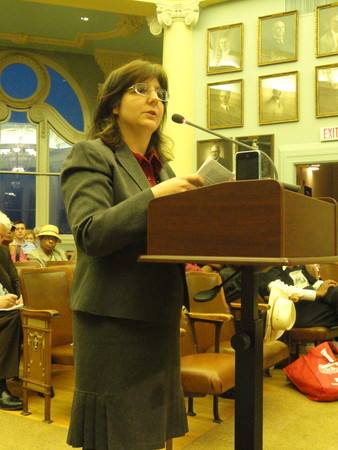 Speaking before the University City Council shortly before they took a vote to create special privileges for those in a “domestic partnership”.

A lot of folks give up if they focus on the observable results.  As you can see from the photo, I was surrounded by the opposition, naysayers and people who are mocking our values.  Even those in the Republican Party are now conflicted over whether they should continue to hold to their own platform. 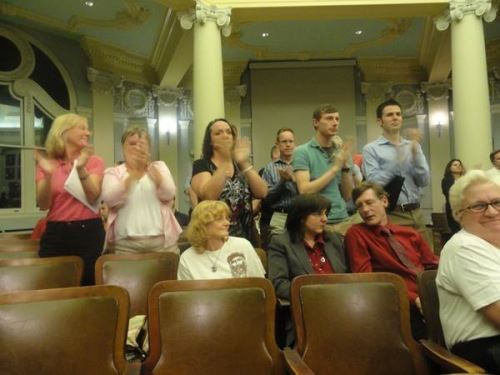 Do we look lonely? We were surrounded in a sea of homosexual activists and the photo only shows a small segment of the chamber. I was not worried about being outnumbered as much as I was concerned about the wrongness of their cause. When I was on the O’Fallon Board of Aldermen, the mayor never allowed applauding, yelling or any other kind of demonstrations or disruptive public displays during the meetings.

On top of all of this, Missouri is garnering national attention from our Governor Jay Nixon who recently issued an executive order ordering our Department of Revenue to accept joint returns from homosexual couples who have gone through the process of mimicking marriage in other states.  State Representative Nick Marshall, who won the Lock and Smith Award the year after I did, is filing the articles of impeachment against Nixon for disregarding “the laws and the constitution of the State of Missouri”.    How long are we going to let our elected officials defy our laws before they are held accountable?

Tonight we interview Dave Smith, president of the Illinois Family Institute.  Dave Smith is working in Illinois to promote pro-family policies in Illinois with a legislature dominated by some anti-family legislators.  While no candidate would actually admit to being anti-family,the policies they are passing are corrosive, and the end result is causing disintegration on a scale we have never seen in our country.   If a state wants to pass laws that will harm families, it will eventually run into financial problems.  We all can learn from watching what is happening in Illinois.  Dave Smith will help us understand both the harm and the good that has come from this.

What you can do:

Listen to our show, forward it to others, ask them to listen.

Abraham Lincoln was having a debate with Stephen Douglas.  Douglas accused him of being two-faced. Lincoln said, “I’ll leave that to my audience.”  “If I had two faces, do you think I would wear this one?”

The Future of Conservatism?