Integrity means doing what is right even when no one else is looking.  Historian, David Barton said it is more important to measure a candidate by how his life stacks up with “The Ten Commandments” than any other qualification.  Part of how this country got into the mess it is in today stems from elected officials who say one thing, and then live another way.

Rep. Cynthia Davis is different.  She has been faithful to her marriage vows for over 31 years.  Perhaps having seven children has helped her develop skills in sniffing out lies and demanding accountability.   Unlike most typical “politicians”, she doesn’t throw away her principles depending on where she is, who is watching and who’s the highest bidder. 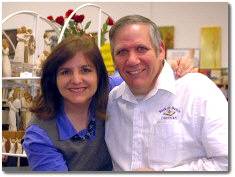 As a successful business woman, Rep. Davis and her husband built Back to Basics Christian Bookstore from scratch, opening in 1989 and serving as the general contractor on the construction on a new building.  Operating an independent retail book and gift shop for over 23 years allowed Rep. Davis to see first hand how government can adopt laws that are counter-productive and hurt “the goose that lays the golden eggs.”

In 1994, Rep. Davis decided to do something about the non-responsive government in O’Fallon and ran for City Council, winning five consecutive elections to that office.  From there, she was elected to four terms in the Missouri House of Representatives.

Some of her legislative successes include being the first legislator to file the Healthcare Freedom Act, the impetus behind the successful “Proposition C” protecting our state from Obama’s national healthcare mandate.  Rep. Davis is also credited for removing abortion providers from our public school classrooms.  As the Chairman of the Children and Families Committee, Rep. Davis was a tireless champion of parental rights, protecting the unborn and marriage legislation.  She won the prestigious awardnamed after John Locke and Adam Smith for being the most constitutional legislator in Missouri, awarded by The Y.O.U.N.G. Conservatives of America

After being term limited out of office in January 2011, Rep. Davis accepted a position as the Executive Director for the Center for Marriage Policy and became an Executive Board Member for Pure Hope (Formerly known as the National Coalition for the Protection of Children and Families).  She now focuses much of her time on her weekly show called, “Home Front”, which is carried by Missouri Grassroots Radio Network and R.O.A.R. (Restoration of America Radio as well as her weekly newsletter.

You can subscribe to her podcast through I-Tunes here and her newsletter here.