Is the Democrat Governor More Constitutional than the Republican Legislature? 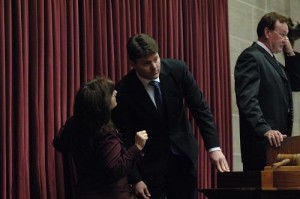 “Excuse me Mr. Speaker, but did you know the legislators are doing something unconstitutional?”

Before a bill becomes law, the governor has an
opportunity to stop or veto it.  Before the bill is completely dead, a vote can be taken in each chamber—the House and the Senate.  If 2/3rds of the members of each chamber agree, they can override the Governor.  This is a valuable check and balance.  In the middle of this month, members of the General Assembly reconvened for the purpose of considering whether they would override any of the Governor’s vetoes.

The first year I was in the House, the Republican majority overrode a Democrat governor’s veto on three bills. After that year, no other bills were overridden while I was in office.  Part of this is because Missouri had a Republican House, Senate and Governor, so everyone was motivated to make the party look good.  Now that there is a Democrat governor, the opportunities are greater to showcase their differences, although they are still very few.  History of vetoed bills:

After 2003, nothing more happened.  Most of the veto sessions were used for backyard barbecues, golf tournaments and fund raisers for members of the general assembly since they were constitutionally mandated to reconvene in Jefferson City.

This year, only one bill was brought up for a veto override.  The one that passed was a pro-life bill that says Missouri has different insurance requirements than what Obamacare mandates.  Even if you are not pro-life, if you are pro-10th amendment or pro-free markets, you should like this because it allows more freedom to those who live in Missouri and more choices for all of us.     Here is an article that describes how one of the Republicans was pressured to vote for the override:

The other bill under consideration for a veto override was a measure to extract more taxes out of the citizens.  Both chambers passed it overwhelmingly during the regular session, but when the leadership realized they didn’t have enough votes to override the governor’s veto, nobody wanted to make the motion for the vote.

There have been several times when our Democrat Governor has been more conservative, fiscally responsible and constitutional than the legislature.  He writes veto messages with every bill he vetoes.  His messages are usually based on the constitutionality of the bill and are written clearly enough that anyone can read and understand what he is saying.  Here is a list of my favorite veto letters:

This bill creates an additional sales tax without a vote of the people:

This law is anti-family because it reduces parental rights:

Here is an example of a new law that does nothing to improve our current laws pertaining to rabies and might cause more confusion over how we deal with the problem:

Here is a veto letter that explains the unconstitutionality of “log rolling” ideas into such a heap that no one can tell what it accomplishes anymore:

This letter explains why a bill is fatally flawed because it was poorly drafted.  Once a bill is passed, it cannot be amended to correct what was intended.  That’s the job the legislators are supposed to do as they read it before voting on it.

We should all be grateful there is a veto process in place and that there are ways to overcome mistakes and allow government to correct itself.  Sometimes bad bills still pass through the legislative process that grow government bigger, more intrusive and more expensive—like new mandates, spending bills and MOSIRA/ Anti-Life measures, despite all the campaign rhetoric to the contrary.

The MOSIRA bill makes it possible for our taxpayer dollars to be spent on human cloning.  Against the warnings of the Pro-Life community, it sailed through the legislature and right into the courts.

Legislators like to take the word of the sponsor as to what the new legislation hopes to accomplish.  Some legislators are more lazy than evil.  It’s easy to vote for a bill when your colleagues are telling you it is good and you trust them.

As your next Lieutenant Governor, I will work on monitoring bills as they emerge so that they can be corrected, adjusted and amended before it’s dangerous.  If a bad bill gets to the senate, I will be part of the debate so that the legislators are aware of the problems before the bill is passed.  As you can tell by reading some of the bad bills that made it to the governor’s desk, some of your own legislators have some explaining to do.  My office will serve as a much needed resource for truth and offer strategies for promoting constitutionally limited government.

Your thoughts on the veto session are important to me, so please share what you think here:
Mail to Cynthia

Under democracy one party always devotes its chief energies to trying to prove that the other party is unfit to rule – and both commonly succeed, and are right.
~H.L. Mencken, 1956

The Taxpayer Protection Pledge – What Could Be More Important?