What Can You Do to Strengthen Marriage? 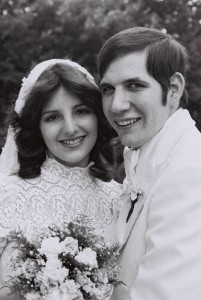 I asked my husband what he wanted to do to celebrate our “32nd Anniversary”.  He said our marriage has been longer than 30 seconds!  If you don’t happen to recognize me or Bernie in the photo, it’s because a lot has happened in 32 years—just ask our seven children.

As we look at the condition of marriage in our entire country today, we can see a decline—not just as reflected in the divorce rate, but also in those who fail to marry at all, yet bear children as if they were married.  Some women agree to this arrangement, yet the numbers show that the women have the most to lose—so do the children.

The Center For Marriage Policy celebrating Protecting Marriage Month by producing a leaflet and asking concerned citizens to print it out and place it on cars in parking lots.

This colonial church was sold to a developer who tore it down it build a residential subdivision.  Unlike the Church, our marriage has not been demolished.  The cultural network of our extended family and community is also still in place and there are some who were in attendance who may even be reading this newsletter today. 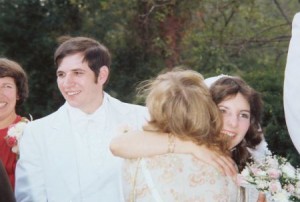 Family and friends are important because they make us answerable and help hold the fabric of relationships together.  We hold each other accountable for being faithful to our vows, sincerely forgiving one another and honorable in our actions.   The entire community is affected by the stability of the homes that make up the community.  Stronger homes, churches and communities naturally limit the size, scope and invasiveness of government.  Conversely, weaker commitments, broken promises, and low moral standards of integrity, especially promiscuity, requires government to enlarge in order to pick up after the disaster.  Those who suffer the most are always the children and the taxpayers.

You deserve a Lieutenant Governor who will be a positive role model and champion of the family.  As you hear all the campaign rhetoric, try to remember that the best way to save the State and Nation is to start at the lowest level and rebuild from the foundation.  When we start electing leaders who understand this, you will have leaders of which you can be proud.  It’s time to restore virtue to all public offices!

Your thoughts on the state of marriage are important to me, so please share what you think here:
Mail to Cynthia 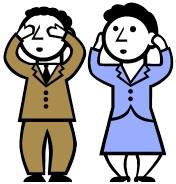 The most happy marriage I can picture would be the union of a deaf man to a blind woman. — Coleridge