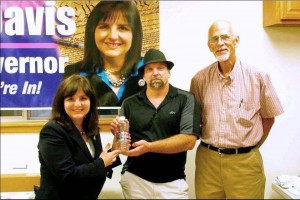 You would think that with government growing bigger than ever before, governmental representatives would be nicer, more efficient and exude a tone of gratitude to the taxpayers.  Not so.

Several weeks ago, my son went to the license bureau to get his driver license renewed.  They told him another young man, born on the same date with a similar name, was convicted in San Diego for driving under the influence.  As a result, they refused to renew my son’s driver license.

I learned quite a bit about just how “big brother” can end up being “big bully”.  A federal law requires all states to import information into a national database where Missouri is required to check before renewing licenses.  However, California includes a bare amount of information to incriminate a wide group of people, but is not specific enough to vindicate the innocent.  They use no photo, finger prints, no middle name, a Social Security number or a driver license number.  All that goes onto this list is the first four characters of the first and last name with a birth date.

We spent countless hours on hold, and when an employee did answer, he or she would either offer us false information or sent us down a dead-end path to another department.  After calling dozens of governmental offices, nobody we spoke with had any idea how to solve the problem their bureaucracy created, including the original license bureau.  I realize we were only speaking with “messengers”, but the pervasive attitude is that this is our problem, not theirs.

I truly feel sorry for all our other citizens who don’t know enough of the “vocabulary” or have the experience to continue pushing the up button until they can find the people who are empowered to fix the problem.  While I am sure that many of the “messengers” have to deal with irate and frustrated customers, it also is offensive to be treated like a criminal when the government agent won’t take on the task of helping us or offering us any guidance on how to get out of the maze.  Perhaps they are so overwhelmed with calls, they see their mission to get through as many as possible, not realizing that we made 50 times more phone calls because the first 49 employees brushed us off to someone else instead of dealing with the issue.  All public employees who are allowed to answer the phone should have some basic training on how to solve problems, or get their superiors involved until the issue is resolved.

When I was a State Representative, I received a great deal of satisfaction from helping people.  When another form of government passed a law that caused financial harm or difficulty to the city without recompensing us for the damage, it was called an unfunded mandate.  How does government get off with passing laws that create hardships on their citizens costing them time and money?  I always taught my children to apologize when they hurt somebody or throw out false accusations.  To do anything less is disrespectful of others. Government should be held to the same standard of common courtesy.  I am not waiting for an apology from government, but all the citizens who are put through this deserve one, especially from their elected officials who are supposed to represent our interests.

On top of that, these new laws violate the principle of “innocent until proven guilty”.  In a wanton act of disregard for the hardship it created, government set up a system that now declares all citizens guilty if they were born on the same date and share a similar name with the accused.

After speaking to dozens of government employees, who gave us vague and misleading information or were completely ignorant of what a citizen needs to know to rectify this problem, we ended up with some helpful information that I share with you now, should you find yourself in a similar situation.

1.)     If anyone with a similar name and birth date gets into trouble with the law, his or her name is in a national database that is left intentionally vague to incriminate the broadest group of citizens possible.  All law enforcement and motor vehicle agencies have access to this information, and they will treat you as guilty unless you obtain a letter from the state that put the offender into the database.  if someone with the first four characters of your first and last name and same birth date is a bad actor, you are automatically in trouble also and will be treated as guilty until you prove  yourself innocent.

2.)    If the State of California does this to you, they have an entire department set up to deal with this called the PDPS (Problem Driver Point System) also called the NDR (National Driver Registry).    Here is the “secret” phone number that very few employees even know:  (916) 657-8849.

3.)    When you call the PDPS, you have to ask for a letter called “Not Your Person” or “No Match”.  The first person we spoke with told us he would mail us the letter in three weeks.  When we called back three weeks later, they didn’t have any record of our phone call or a letter they said they would mail to us.  Fortunately, we got someone who offered to FAX the letter to Kinkos at our personal expense.  They will not scan it and e-mail it to you.

4.)    Forever after—the rest of your life—you need to keep this letter with you so that if you are ever pulled over by any law enforcement agency, you are obligated to produce this as proof that you are not the same one listed in their database.

How could we get to a point with modern computers where government is using this new data capability to harass us but not using it to clear us?  I am sure the lawmakers were sold on this idea that it was important for “public safety”.  How many more chains will we accept from our government because we believe it is in “our best interest”?  The legislators thought we would exchange our liberty for safety, but we are ending up with neither.   It’s easy to see how these problems created by a government could make people willing to receive a government installed microchip in their bodies.

The story doesn’t end there.  Even after my son went back to the O’Fallon license bureau with this “Not Your Person ” letter in hand, both a counter employee and the supervisor refused to renew his driver license and offered no guidance on how to solve the problem.  A frustrating part about dealing with a governmental bureaucracy is that their employees make it difficult for citizens to comply with their flawed laws and then fail to empower us to remedy the situation.  They are trained on how to block citizens from getting their licenses renewed and enforce regulations but take no responsibility or are not trained to solve the problems created by all these laws.  Most citizens want to live within the rules, but government rules can make it difficult on those it is supposed to serve.

One problem with our current system is that the staff at each license bureau can change every time the governor changes.  I called the Department of Revenue in Jefferson City and was told the supervisor should have called them to get direction on how to solve this.  The staff in Jefferson City told me if I could fax them the letter from California, they would call my license bureau and tell them what to do.  It would be dandy if everyone had FAX machines and a consistent Internet connection.   Instead, we opted to drive to another license bureau where they took care of getting our son’s license renewed.  The employee who took my son’s picture for the new license even told him how to fluff up his hair to look good in the photo; so there is a wide variation of quality and service between the different license bureaus.

Going through this experience helped me learn more about the problems created by big government and how easily citizens can be treated like vassals by those who are supposed to bring about a higher level of civility.  I would simply warn my readers that we should never let government get so big and oppressive that innocent citizens are being harassed and the bureaucracy becomes too thick
to be navigated.

As your Lieutenant Governor, I will give our legislators a conscience on how the unintended consequences of their bills hurt those they should be helping and dehumanize all of us.  We owe it to our constituents to do better than this.

Your thoughts on government bureaucracy are important to me, so please share what you think here:
Mail to Cynthia 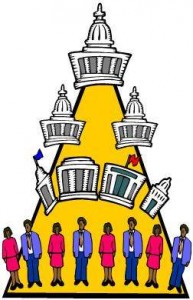 If you think you’re getting too much government, just be thankful you’re not getting as much as you’re paying for.
~Will Rogers~