Christian persecution is a reality in foreign countries, but we never thought we would see it here in the land of the free and the home of the brave.   We sometimes see people being mean spirited in the private sector, but when it comes from our government, it’s time to call a foul.  Whether you like the man occupying the White House or not, he is the commander of the military and is ultimately, responsible for the behavior of all branches of our military.  This week the Army started training their soldiers to view Christians and those who adhere to Biblical principles as domestic haters.

Communists, Muslims, Atheists and those who are hostile to the Bible have historically despised Christians.  Now we find ourselves in a situation where our government is treating Christians, who stand for protecting innocent life and have done more to help the planet than any other group of people, (Salvation Army, hospitals, soup kitchens, Samaritan’s Purse, YMCA, prison ministries, food pantries, helping foreign countries, etc.) as though they were the bad guys.

Our government, which is charged with the duty of protecting us, appears to be clearing the way to persecute, prosecute and harass Christians by changing the rules.  In order to pass judgement on a group of people, there should be evidence beyond mere “political correctness”.  For example, Planned Parenthood has actually killed people, sexualized school children, promoted non-marriage and homosexuality.   We should realize it’s okay to assess behavior and make judgements whether it helps or harms our culture.  Our country was founded on Judeo-Christian principles and uses the Biblical standard for judging right and wrong.  It is imperative that we recognize and call evil, “evil” and call good, “good”.

One tradition we still see from time to time is street preaching.  A few months ago, my husband, Bernie, went to Springfield on a Friday night and watched as a police officer tried to make a local pastor stop his open preaching on a public street.  The pastor showed the police officer a letter from the City Council stating he had permission to preach.  That letter ended the episode until July when the police confiscated the pastor’s sound equipment and have not returned it yet.

Recently, the Springfield police not only confiscated the pastor’s equipment, but this time they arrested him and two others and held them in jail for hours.   This week on Home Front, we interview that pastor, Aaron Brummitt.  There should be an outcry.  We owe it to our country, our past and our future to replace public officials who are using their power to shut down any of our constitutional freedoms.

What you can do:

Don’t sit on the sidelines.  The Springfield City Council may be wondering if we care about the first amendment.  Let’s show them we do.  Write a letter to your City Council and Mayor letting them know we won’t put up with them disregarding any part of our Constitution.  Put them on notice that we hope this was a “one time” mistake.  It will be corrected and this should never happen again here or anywhere else.

Tonight we talk with the pastor, Aaron Brummitt, about how and why the Springfield Police Department arrested him.  We will talk about our first amendment rights and what we need to know to protect ourselves from similar behavior from our bureaucratic authorities.

Listen to Home Front On-Demand, Anytime-Anywhere
www.cynthiadavis.net/category/home-front-podcast/
Home Front is also part of the Missouri Grassroots Radio lineup of pod-casts and can be heard live most Tuesday evenings at 8:00 pm Central Time, at www.blogtalkradio.com/missourigrassrootsradio 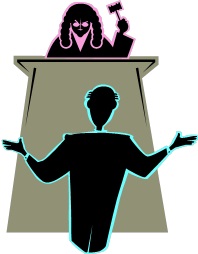 It was a Tuesday when the judge passed a verdict against a certain lawyer’s client.

On Wednesday, the lawyer rushed into the judges chambers.
”Your honor, I just found out new information and I would like to file an appeal.”

“What did you find out?”, asked the judge.

After a few moments of silence, the lawyer responded, “I found out my client has another $5000 dollars.”