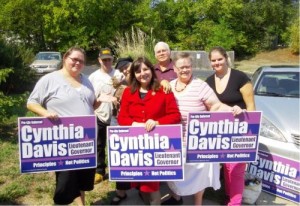 This is a picture someone took of me with some friends in front of a church.  Not all pastors or churches allow candidates to share their hearts and souls with their congregations.  Some pastors are afraid to do so because they don’t want members of their congregations to be offended.  I am grateful  and applaud the pastors who are brave enough to engage candidates, allow the candidates to be questioned and are interested in the intersection between our faith and our public lives.

It’s very difficult to sort through all the candidates to find the ones who are honorable and trustworthy.  Most of the well-funded candidates have sold their souls to get the money from the corporate giants, kingmakers and political machinery.  Unless the churches tune into the cultural dynamics of the political world, we are doomed to see our government run by those who are not bound by any moral compass.  On the other hand, there is still time to wake up the sleeping giant and get our state back on track.

Years ago, the pastors took note of votes, words and deeds of their elected officials and would hold them accountable when they returned to their communities over whether they voted in a godly manner or whether they voted against the moral teachings of the Bible.  Morality mattered both publicly and privately!

At the beginning of our country, the British attributed our nation’s independence to the brave pastors and their willingness to speak out about right and wrong.   The Declaration of Independence came from sermons that were preached in the pulpits across our country.  The pastors lead the political thought and actions of the people based upon Biblical principles.

Church attendance is trending downward nationwide.  Even if church attendance were up, it would make little difference because many churches are marginal in their effect on society.  Many pastors are afraid to say anything “political” for fear of offending some in their congregations.  Instead of churches shunning candidates and staying away from political topics, they should embrace the political process, vet candidates, invite them to attend events and ask them questions pertaining to how they live by the 10 commandments.   Fewer anti-Christlike candidates may want to run if they knew they would be asked to share in a church how their relationship with God affects their decisions.

Pastors don’t usually allow this type of interaction because some are afraid the candidates might mislead their congregations, but if the pastors are strengthening their congregations to discern Biblical principles in government, this should not be a concern.  Either the congregations will hold them accountable, or the candidates will decide for themselves to stay away for fear about being asked the hard questions, such as if they patronize strip clubs or have committed adultery, if they covet other people’s money, or if they have sold out to the lobbyists who offer the largest campaign donations, or how they approach decision making and discernment of right or wrong.

It was gratifying to be joined by so many others who understand the importance of connecting together the fabric that binds us to God, each other and our country, but we must do more.

Unless God has specifically told us to go live in a cave, we are called to be salt and light—preventing our culture from decaying and being a shining light for those who are stumbling around in the darkness.  I urge you to join me with a grand experiment to prove that the church is still alive and functional.  Invite me to come and speak to your congregation.  Get your friends to understand what Biblical voting looks like and then vote for those who line up with the Scriptures.  We must overcome evil with good.  Instead of cursing the darkness—let’s  turn on the light switch!

Your thoughts on churches and candidate ethics are important to me, so please share what you think here:
Mail to Cynthia

LETTER TO GOD
A Sunday School teacher challenged her children to take some time on Sunday afternoon to write a letter to God. They were to bring their letter back the following Sunday.

One little boy wrote, “Dear God, We had a good time at church today.
Wish you could have been there.” 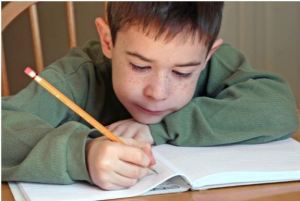