Last week I was invited to take a morning off the campaign to fill Phyllis Schlafly’s shoes as the “Guest Host” on Eagle Forum Live.

You can listen here: 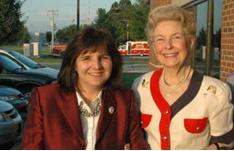 Also in the news, the St. Louis Post-Dispatch published an article about the Lt. Gov. race.

Curiously, the reporter called me social conservative, but the term “constitutional conservative” would be more accurate.  Some office holders use government to promote social programs.  Instead, I am in favor of limiting government to the proper functions related to its existence as described in our Constitution.

Here is an excerpt from the article:
Also running is Constitution Party candidate Cynthia Davis, who is not shying from Kinder’s personal controversies, saying, “The values voters know I’m their champion.”

Davis, 52, of O’Fallon, could siphon votes that would traditionally go to the Republican candidate, with her ties to religious-right groups that advocate social conservative causes.

Davis, a past Republican state representative, has been a controversial figure in the past — most notably for comments she made against subsidized lunches for needy children.

Note:  The reporter commented that I  criticized a “big government” program that excluded family participation, yet I am the biggest champion of all children.  Their greatest need is to be cared for by their parents, not to be institutionalized.  Strong families, churches and communities are the best way to fight against oppressively big government.  We cannot limit government programs as long as we make some “sacred cows” where moral reasoning is prohibited.

But she is the only candidate in the lieutenant governor’s race to be endorsed by Missouri Right to Life, the state’s largest anti-abortion coalition.

“I’m keeping my Republican supporters with me, for the most part,” Davis said

In summary, both the Democrat and the Republican parties are motivated by causes beyond the reason for which government exists.  Special interest groups still try to gain access to the taxpayer’s pockets.

Your thoughts on the Lt. Gov. race are important to me, so please share what you think here:
Mail to Cynthia

OUR CONGRESSMAN DID WHAT?

Can you guess which organization this is?

It’s the 535 members of your United States Congress. The same group that perpetually cranks out hundreds upon hundreds of new laws designed to keep the rest of us in line.