For months we watched media chronicle the events of the Republican Party wrangling for who they would nominate for president.  It would have diminished the suspense and drama had we known earlier that Mitt Romney was the chosen one.  Nevertheless, many good  citizens received a glimpse into partisan character as well as a grand civics lesson through the exercise.

There are more lessons yet to come.  Imagine if after sustaining an election defeat, you embarked on a quest for how you could change the rules to improve your odds of winning in the future.  Our founding fathers set up a system where all the states would be fairly represented.  In 1913, the states took a major blow by losing their rights to select their senators and now this idea would block our state from being able to choose the president who wins in our state.

This week the House Elections Committee is holding a public hearing on a piece of legislation that would get rid of the electoral college.  This idea works by leveraging urban centers since they are overwhelmingly Democrat to shift the way we elect our presidents to a method that would favor their party.

Holding a public hearing would not surprise me if we lived in a state dominated by a Democrat majority, but the big shock is that Republicans have control of the legislature, and this bill is being pushed by Republicans, particularly many notable entrusted leaders of the House of Representatives.

This is not a new idea.  When I was in the Missouri House, I served on the Elections Committee and heard this bill years ago.  As soon as the hearing was over, I asked the chairman the same question, “Why are we conducting a formal public hearing on a bill that is unconstitutional and seeks to undermine the sovereignty of our state?”  How could any state legislator, who took an oath to protect and defend our constitution, push a bill that would snuff out the voice of our citizens?  That is the question Missourians should be asking all of their legislators.

Why is it that once good bills lose a vote, they seem to go away forever, but when bad bills comes forth, they continue to regurgitate every session until they finally pass?

Calling it “The National Popular Vote”  sounds much more positive than calling it the “Trash the Electoral College” bill.  Sadly, if they wanted to change our Constitution, we already have a prescribed manner in which to accomplish this.  Yet, the proponents of this ideology know they will never get the support to change the Constitution through legitimate means, so they are trying to do it in a back door manner that will accomplish the same net result.

Your thoughts on how we elect our president are always important to me, so please share what you think here:
Mail to Cynthia 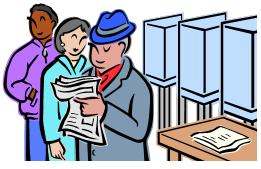 Do you ever get the feeling that the only reason we have elections is to find out if the polls were right?
~Robert Orben