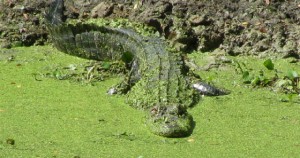 Swamp:   “A shallow body of water in a low-lying, poorly drained depression… a tract of wet, spongy land, often having a growth of certain types of vegetation, but unfit for cultivation…Deep in the heart of Louisiana lies America’s largest swamp–a million miles of inhospitable bayous, marshes and wetlands where nature rules and humans struggle..”

We are in a cultural swamp, created by a moral swamp.  Many of us are asking, “How do we get out of this swamp?”

I did my part last week when I fought for our side of the marriage debate on Channel 5 in St. Louis.

Being on the news will help shape the culture for those with honest questions.  Being on a reality show and exposing yourself and your family to the ridicule of the left won’t.

If you have not seen “Wife Swap”, that’s understandable.  The most TV I see happens while walking into Costco past their dozens of TVs on display.  When a friend of mine called and said some people I know personally are going to be on “Wife Swap”, I was flabbergasted.  We can tell a lot about the moral decline of our culture by taking note of the content of our media outlets.  Some of the same appetite driving TV programing today, may have been similar to what drove spectators to watch the gladiators in the coliseum.  If we want to watch other people’s foibles, the least we can do is learn some lessons.

The women in Wife Swap set the rules and the husbands are supposed to submit to whatever they decide.  How realistic is that?  Additionally, subjecting children to a social experiment for two weeks with a foreign caregiver can cause lasting harm.  They deserve protection and stability through their parents at all times.  Time will tell if these children were affected to being subjected to values of someone who makes a practice of morally repugnant behavior.

We are all on the same team trying to put the unraveling fabric of our society back together.   Yet, misguided efforts may put the entire team at risk and we may lose ground.  In the end, the family attempting to uphold traditional values could not even do so till the conclusion of their contract.  By wimping out, they then forfeited, to the perverse side.

The conservative woman defended her appearance on the show as being an act of confronting the culture.  Some who watch this show wonder why the conservative mom wore such heavy makeup and jewelry, suits and cocktail dresses.  In addition to the $20,000 dollars, the show pays for all jewelry, clothes, makeup, meals, lessons, linens, etc.  Someone posted this on Facebook:

“A few years back a reality show approached us and asked us if we wanted to “swap” spouses for an episode and film it. We immediately declined. My kids aren’t a social experiment and the show is tacky. We have other platforms through which to sow seeds.”

Many are asking how we can become “culture warriors”.  Perhaps we all could learn a lesson about what we should do and how to move the ball down the court.  Exposing yourself to the mockery of the Left is not the proper arena.  When Sarah Palin went on Saturday Night Live, she was hoping it would promote her the image as one relating more to the masses.  I doubt it gained her one additional vote.  Independent voters needed to see someone who would look Vice-Presidential, not who could crack the best jokes.  The purpose of Saturday Night Live is to amuse and make people laugh, not to create teachable moments on public policy.

Another reader wrote this response:

“I am not a lion tamer, nor do I slip into the swamp to pet the alligators for the same reason.  I could get a job in a strip club and stand up to the strippers, but that doesn’t do any good, nor does it move the ball forward. If a stripper showed up at my front door, I sure as heck would not let her in.”

We don’t have to get tattoos, take up smoking or patronize bars to prove we are just like them.  Our country has political problems because we have cultural problems.  We have cultural problems because we have spiritual problems.  There is very little common ground between those who respect  biblical principles and those who want to have a “free for all.”  If our goal is to appeal to the lowest common denominator, we are in trouble because someone will always lower the bar below the line of civility.

The culture war can only be won by us individually reaching out to the hearts of others around us.  As we are kind, loving, principled and moral, we will model economic and emotional stability.  Have we ever seen a time in history of mankind when morality and human kindness expanded without the influence of a spiritual leader or society turning to our Judeo-Christian beliefs? Currently, we don’t have either.

The welfare system rewards people for breaking up their families and have children without marriage.  This is not moving our culture in the right direction.  Families should pull together and take responsibility for each other instead of dumping their pathology onto the lap of government.

Each one of us can do something to make a difference.  Many voters tend to support candidates who push for bigger government, which means more taxation.  Until the majority of the voters stop this trend, it will continue.  When we strengthen our own homes, we can patch the tattered fabric of our society and have pride in our integrity once again.  If we want a better country, we must start by having better families.  If we want better families, we must start by being better examples.

Your thoughts on “Wife Swap” and the way to win our culture back are important to me, so please share what you think here:
Mail to Cynthia

A father was showing his young son the family photo album and came across a picture of himself and his wife
on their wedding day.

“Was that the day Mommy came to work for us?”
the son asked.