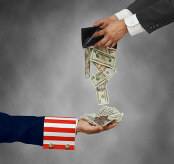 The special session is now over and the taxpayers got hit with a tab of over 280,000 dollars just for the added expenses of bringing the legislators back to Jefferson City (food, gas, lodging and extra staff.)  If anyone says the state is running out of money, we have just observed that the state has plenty of money for whatever the legislators deem worthy of funding. In this case, the legislators showed up in Jefferson City, authorized tax credits, fought among themselves, dug in their heels in a standoff over budgetary and philosophical issues, then adjourned.

One of the purposes of the special session was to deal with an intriguing party nomination question.  In many respects, a political party is similar to a labor union. While any qualified candidate can run for any office, the power comes from the solidarity of the team effort which in many cases can become an unbeatable force by any opposition. Each political party is expected to nominate one person for each position.

The Governor allowed the legislators an opportunity to make a legislative change that would save the taxpayers around $8 million.  However the legislators failed to pass the bill.  It pertained to how political parties select their nominee. Up until five years before I was elected, the political parties selected their presidential nominees internally.  In 1998, the Missouri legislature, made up of Republicans and Democrats voted to force taxpayers to bear the expense.  This was designed to spare the parties of doing their own work. In 1998, this new law cost our state four million dollars.  Since the expenditure was put onto our law books, the legislators alleviated the political parties of having to figure it out for themselves. This law was specifically designed to help the Democrats nominate Dick Gephart and the Republicans nominate John Ashcroft who were both considering running for President of the United States.

This raises questions like: Why did the senate deadlock 16-16 on something that should have been an easy vote?   Why didn’t the Lieutenant Governor break the tie as he is constitutionally authorized to do? It says in our State Constitution, “Lieutenant Governor…shall cast the deciding vote on equal division in the senate…”

I have served for years as an election judge and can attest that during primary elections it was very common for people to ask me why they must select a ballot for one specific political party. This shows how many voters do not understand that this is only a nomination for who the party will put forth. The best solution is for political parties to do their own business within their own party. The public should not be forced to pay for any private corporation to make internal decisions. If you don’t like the way your party determines the outcome, get involved in making it better. If we are going to limit our government from enlarging to greater proportions, we must all engage in our own civic responsibility.