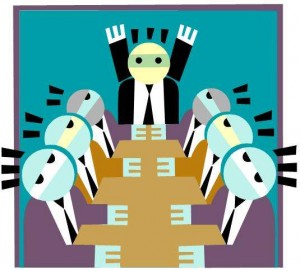 My mother-in-law saw it on the news in Michigan.

As an eyewitness to the debacle which occurred at the Republican Presidential caucus in St. Charles County Saturday, it was shocking to see how quickly the pretense of openness and adherence to the Bill of Rights is dismissed by the current leadership of the Republican Party.  The crisis, which made national news, involved calling in about 20 police officers, having a helicopter fly overhead and with two law abiding citizens being arrested—one was a Republican committeeman.

This caucus epitomizes what is wrong with the Republican Party.

Despite weeks of preparation, those running the meeting were doomed to failure.  Their options were to either offend the “power brokers” to whom they owed their allegiance and positions or offend the caucus members who were shut out of the process.  They sided with the power brokers.

The first hint of trouble began with the presence of a police car parked right in front where everyone entered.  Having police officers in a building before there are any problems sends the wrong message.  This was not a meeting of criminals.  This was a gathering of people who care about participating in the political process.  Other social events do not include law enforcement, so why pre-offend people with a presumption they want to start a riot.

Though Missouri does not have registration by party, I was told to leave because I am running for Lt. Governor on the Constitution Party ticket. That should not have denied me the opportunity to participate no more than a Reagan Democrat should have been told to leave.   I was also told that I could not stay to simply observe the proceedings.  Then the doors are locked and nobody is allowed to simply observe or to record anything.  Rules against being open and transparent have no place in a modern political party.

The meeting was held in a public building built with taxpayers dollars but turned over to a private exclusionary group and process.  How then do the two parties justify the taxpayers of Missouri spending nearly $8 million to hold a beauty contest for President a few weeks ago, but then turn around and say the process for the selection of the real delegates is locked?

If the political parties can pay to rent public space to select a Presidential nominee, then why didn’t they both pay for the statewide vote that meant nothing?

The caucus was scripted in a manner that mocked open discussion, debate and fair voting.  The party bosses put their thumbs on the scales to guarantee that no one else could be elected to chair the meeting. This meant refusing to allow any points of order, having people arrested for video recording and adjourning the meeting with no business conducted.

This is how far the political insiders were willing to go to make sure there was no possibility the outcome could be anything other than what they had rigged.

This is the kind of behavior that precipitated my decision to leave the Chairmanship of the Republican Party in St. Charles County and to run for Lt. Governor on the Constitution Party ticket.

I truly feel sorry for those in the Republican Party, who are principled because they are in a hopeless situation, surrounded by those who have polluted the process by money and power.  Some people may think the elected officials are in charge, but it is really a very small group of puppeteers pulling the strings who are orchestrating a plan that defies freedom.

These are the tactics of third world dictators, not freedom loving Americans.

I thank the 1,200 people who cared enough to give up their Saturday to come out and attempt to participate in the selection process.  The citizens were innocent and deserve to be acknowledged for their efforts, especially those in St. Charles County who gave up half of their day to learn just how broken our system of government has become.

When I attended four years ago, there were only about 300, so I know most attended for the first time and left with a more cynical impression of the political process.

There were 1200 witnesses this year to why the party is no longer capable of nominating good people.  Lawlessness happens when the players lose confidence in the referees.  This is why voters I speak with across Missouri are so hungry for change and to send the leadership of both parties a message this November that they have taken the middle-class and average Americans for granted too long, and they don’t own our votes.

Your thoughts about how we select presidential nominees are important to me, so please share what you think here:
Mail to Cynthia

The pastor invited anyone to come down to the front of the Church after the service for special prayer.  One older man came forward to request prayer.  When the pastor asked him about his prayer request, he answered, “Pray for my hearing.”  The pastor put his hands over the ears of the parishioner and prayed that God would do something great and mighty.

When they opened their eyes, the pastor said, “Now how is your hearing?”  The man said, “I don’t’ know.  It’s not until Wednesday.”