President Trump nominated Brett M. Kavanaugh to the US Supreme Court.  I have heard good reports about Kavanaugh, so it doesn’t bother me that he is a man and has light skin or if he’s a minority.  If he upholds the Constitution, that is the main criteria!

The candidates who win their elections make laws and represent us.  The appointed judges are supposed to represent the law, which includes the Constitution.  We don’t get to appoint our judges, but we can pressure our senators to confirm the appointment.  The timing can’t be better because many senators are up for re-election one month after the confirmation vote is expected.

The US Supreme Court nomination is about far more than abortion.  Even if the US Supreme Court overturns Roe v. Wade, that would revert life decisions back to the states.  All these scare tactics are a disgrace to the oath of the office.

There is no excuse for the uncivil behavior from the left over this nomination.  When Elena Kagan and Sonia Sotomayor were nominated, those who were on the right just accepted that the Democrat President would appoint someone who upholds his left-wing ideology.  We had no mobs or fear of violence.  “To the victor goes the spoils”.  We accept that the President will always nominate someone who resonates with his political philosophy.

Even though we knew Barack Obama would pick US Supreme Court justices who were progressive and would push left-wing ideology, the senators realized they couldn’t fight against it unless the nominee had some type of shady or criminal background or had demonstrated poor character.  As a result, there were plenty of Republican Senators who voted for the confirmation of Barack Obama’s appointees.  A confirmation vote is not the same as an election!

While some people celebrated the latest decision of the US Supreme Court over a Christian baker case, we must temper our euphoria with reality.  If we measured the decision according to how it squared up with the Constitution, we wouldn’t be so happy.  It actually created a foundation for worse decisions yet to come.  What has the Supreme Court done for Conservatives?

Those on the left wing have many reasons to be satisfied.  In our lifetime, we have seen the US Supreme Court shift the Country the wrong way, regardless of which president made the appointment.  Our culture has progressively become less restrained, more godless and unprincipled.  The left wing is putting up a fight to keep it that way.  The right needs to fight as hard as the left does for what we believe.

Here’s a quote from Barack Obama: “…in those difficult cases, the critical ingredient is supplied by what is in the judge’s heart….”  Ha….This doesn’t speak well for just interpreting the Constitution.  The Constitution was never designed to be twisted into current politically popular philosophy of the day or by what’s in a specific judge’s heart.  Hopefully, whatever is in a justice’s heart is a conscience directed by God’s principles and an understanding of the obligation to follow the Constitution-the Supreme Ruler and the supreme law of the land.

We can’t compromise our way to victory.  Our victory only comes from having moral leaders who fear God and keep his Commandments.

What do you think about the US Supreme Court nominee?

1.) Pray for our elected leaders to cast the right votes.  If they don’t, vote against them in November.

2.) The Home Front newsletter and podcast continues. Your involvement to fund our ongoing efforts, research and equipment will make a difference. If you want to continue to support us in this effort, you can mail a check to this address:

On today’s show we interview Peter Pfeiffer, candidate for the US Senate nomination. 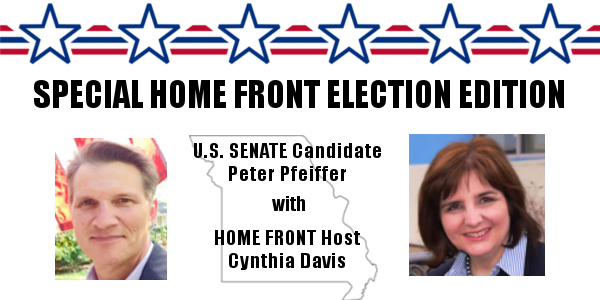