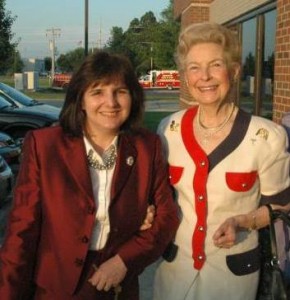 She is known as a “Conservative Icon”.  This photo was taken when Phyllis Schlafly did a fund raiser for one of my campaigns.   We had a memorable night with Martin Duggan and Bill Federer and many were inspired.

Phyllis Schlafly became famous over her efforts to reform the Republican Party with her first book, A Choice, Not an Echo.

Today, the GOP “Kingmakers” are still working against the success of many grassroots candidates.  We have won a few small battles, yet it appears we are losing the war.  Back in 1964 when the book was written, TSA had not been invented and we Americans would never tolerate strangers groping us if we want to get on an airplane.  Social Security was a retirement program for those who paid into it.  People expected privacy with their medical records and e-mail communications.  The Democrats of 40 years ago were acting like the Republicans of today.  “The American Spirit” was stronger and more unified.  We had more publicly held common morality.

Yet there is value in the struggle.  Although I have been out of office for over two years, I have been asked to join Glenn Beck on the program for the Covenant America Conference in Kansas City.  Without the war, there can be no heroes.  Pray that God will bless my efforts as I serve as a conscience for our country.  Tonight we will be interviewing Phyllis Schlafly on our Home Front Radio Show.  Although she ran for congress twice and was defeated, Phyllis Schlafly stands as an example of someone who can make a difference without holding public office.

Your thoughts on how to make a difference are important to me, so please share what you think here: 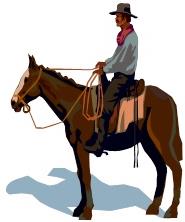 A cowboy named Mark was overseeing his herd in a remote mountainous pasture in California when suddenly a brand-new BMW advanced toward him out of a cloud of dust. The driver, a young man in a Brioni suit, Gucci shoes, Ray Ban sunglasses and YSL tie, leaned out the window and asked the cowboy, “If I tell you exactly how many cows and calves you have in your herd, Will you give me a calf ?” Mark looks at the man, then looks at his peacefully grazing herd and calmly answers, “Sure, Why not?”

The man parks his car, whips out his Dell notebook computer, connects it to his iPhone, and surfs to a NASA page on the Internet, where he calls up a GPS satellite to get an exact fix on his location, which he then feeds to another NASA satellite that scans the area in an ultra-high-resolution photo.

The young man then opens the digital photo in Adobe Photoshop and exports it to an image processing facility in Hamburg, Germany. Within seconds, he receives an email on his iPhone that the image has been processed and the data stored. He then accesses an MS-SQL database through an ODBC connected Excel spreadsheet with email on his iPhone and, after a few minutes, receives a response.

Finally, he prints out a full-color, 150-page report on his hi-tech, miniaturized HP LaserJet printer, turns to the cowboy and says, “You have exactly 1,586 cows and calves.”

“That’s right. Well, I guess you can take one of my calves,” says Mark.

He watches the young man select one of the animals and looks on with amusement as the young man stuffs it into the trunk of his car. Then Mark says to the young man, “Hey, if I can tell you exactly what your business is, will you give me back my calf?”

The young man thinks about it for a second and then says, “Okay, why not?”

“You’re a Consultant”, says Mark.
“Wow! That’s correct,” says the man, “but how did you guess that?”

“No guessing required.” answered the cowboy. “You showed up here even though nobody called you; you want to get paid for an answer I already knew, to a question I never asked. You used thousands of dollars worth of equipment trying to show me how much smarter you are than I am; and you don’t know a thing about how working people make a living – or about cows, for that matter. This is a herd of sheep. …. Now give me back my dog.

Moral: All qualified are not intelligent, and all intelligent are not necessarily qualified.