The Governor and Christianity 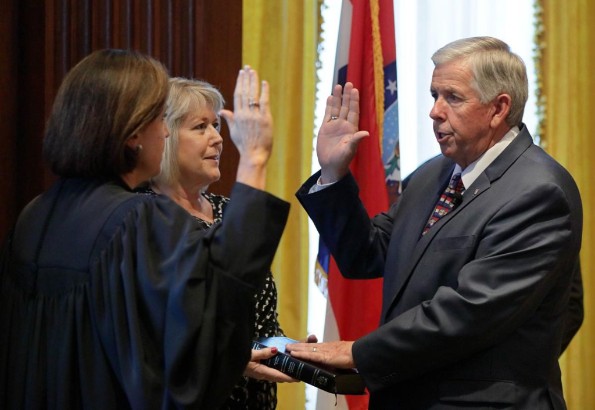 I heard someone say, “I bet Peter Kinder regrets giving up his Lt. Governor office now.” He gave it up to run for Governor. Peter lost the primary, so Mike Parson won the open Lt. Gov office. Nobody could have predicted the new Governor wouldn’t last even 17 months. Yet, God still controls who goes where. Here is a picture of our new Governor, Mike Parson, getting sworn into office last Friday. There’s something special about swearing on a Bible. It is a statement that God will hold him accountable for whatever he does.

After last week’s resignation of our Governor, I posted this:  “I’m calling on all Christians to pray that Eric Greitens and his family will find Christ at the end of this mess.”

The responses that resulted gave me great insights into the thinking of most people in our culture today.  Many assumed he was a Christian because he claimed to be “a conservative”, (whatever that means) and a Republican.  Ha.

Some showed moral outrage, but others tried to shame those who were morally outraged.  Should one’s religion be a factor for serving in public office? END_OF_DOCUMENT_TOKEN_TO_BE_REPLACED