Along with other bad ideas passed during the special session, the House of Representatives passed a resolution to “support high production and full funding of the F-35 Joint Strike Fighter program.”

This raised some eyebrows because the F-35 is made in Texas and is in competition with the Hornet, which is made by Boeing here in Missouri.

A St. Louis Post Dispatch article appearing this week made these remarks:

“This is what the Republican-led Missouri House did Thursday when it was supposed to be debating a jobs bill in the now five-week old Missouri Legislature’s special session:

It took a break to pass a worthless – but not meaningless – resolution that directly slapped the face of one of the state’s biggest employers… That sounds a lot like the kind of wasteful spending the Missouri House normally likes to pass resolutions to oppose. In this case, it probably doesn’t hurt that the company that makes the F-35, Lockheed Martin, pays the firm of Republican political consultant Jeff Roe to promote its business in Missouri. Mr. Roe offers political advice to most of the heavy hitters in Missouri Republican politics.”

It suggests the special session was called for the purpose of further ingraining cronyism.  It bears noting that no legislative action can come up for a vote without the support of the Speaker of the House.

Ann Wagner, who is running to replace Todd Akin in the US House of Representatives, blasted the Missouri House for passing such a resolution.  Additionally, our congressman, Todd Akin responded to this by issuing a statement offering support for Boeing.

Does this legislature want to be known for passing a resolution that benefits one Republican lobbyist/consultant at the expense of one of our good corporate citizens?  It helps a state to strengthen our commerce and industry when we honor and celebrate those businesses who want to invest their time, energy and money into Missouri.  My son was a crew chief on the F-15 employed by the Missouri Air National Guard 131st Fighter Wing.  Since the St. Louis base was shut down, he moved to Whiteman Air Force Base, yet we are all grateful to Boeing for producing products that allow our family members to work near home.  I have toured Boeing several times and we should all be very grateful to have such a fine aircraft manufacturer in our State.

The value of this special session needs questioning. This resolution is only one small example of misdirected efforts. Yet there is hope as more citizens wake up with an enhanced awareness of governmental waste, fraud and abuse.

What is a Special Session?

A “Special Session” can be called by the Governor to allow the legislature to have time to pass legislation.  The Missouri Constitution requires the regular session to be about 4 ½ months long.  The legislature always has a rush at the end of the session to pass bills, but the end of the session also offers relief from the threat of more bad bills being passed.  Having spent eight years of my life there, calling a special session certainly raises this question:  Why couldn’t the legislation pass while they were in the regular session?

When I was in the legislature, we had 5 special sessions in the course of my eight years.  The Governor called them for various reasons, but I wondered why it was not reserved for true emergencies where legislation must be passed outside of the regular session.

So far the taxpayers have spent nearly $200,000 this year in expenses for the legislators to return to Jefferson City to further legislate—AND IT’S NOT OVER YET!  If the special session is based upon a critical issue that cannot wait until the next regular session, there is a presumption that the benefit to the taxpayers should negate the expense of bringing the legislators back to Jefferson City.  Although their base pay remains the same, the state pays for their mileage and per diem for every day of special session.  Regardless of how many golf games legislators can squeeze in, the purpose of calling the special session ought to be for actually conducting essential business. 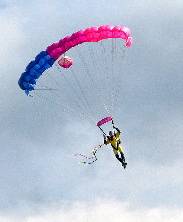 “Both optimists and pessimists contribute to the society. The optimist invents the aeroplane, the pessimist the parachute.”
~ George Bernard Shaw 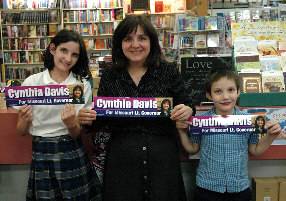 New campaign bumper stickers are now here. They can be picked up at 1002 Highway K in O’Fallon or you can request yours by e-mailing us at

.  A suggested donation of $5.00 per bumper sticker would be kindly appreciated.  You can make your donation online or by sending your check or money order sending your check to Elect Cynthia Davis, 94 Sunfish Drive Suite 201, Defiance, MO 63341-1636.  This is a great way for you to help advertise for our campaign so get yours today!